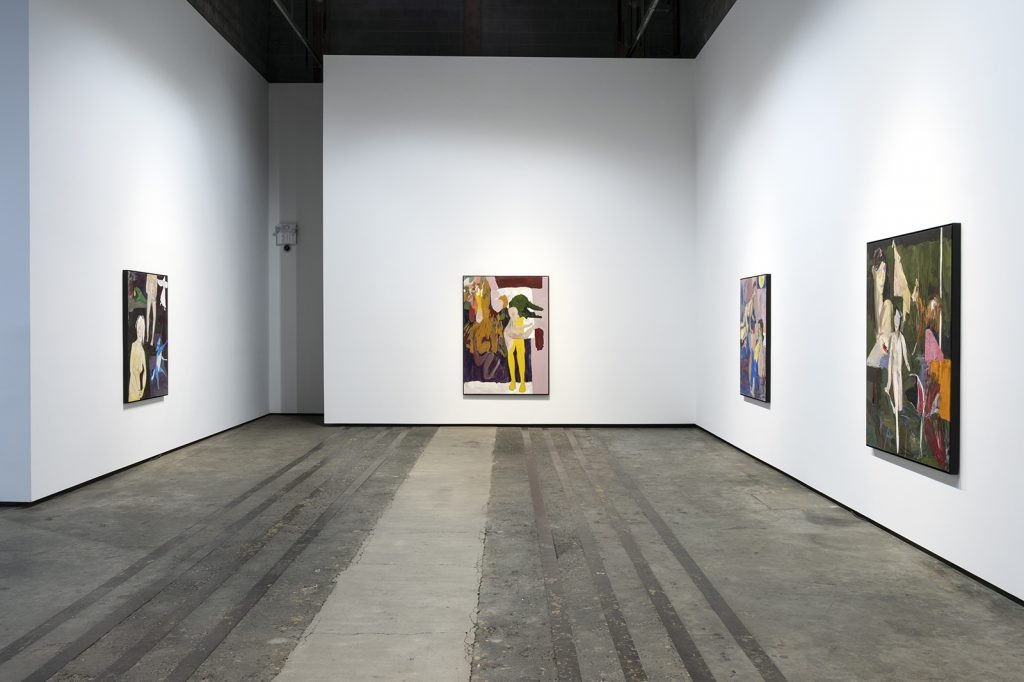 Collin Johanson
In the Grass

Monte Clark Gallery is pleased to present an exhibition of new works by Collin Johanson, his second solo exhibition at the gallery.

In the Grass embraces the difficulty of comprehending, articulating, or categorizing contemporary lived experience. Occurring in Johanson’s work are broad themes connected to the human condition such as love, consolation, precariousness, frustration and death. The artist addresses these fundamental experiences and expresses his relationship to an increasingly dehumanizing and unstable world. Themes of theft, exploitation, confusion, distraction, friendship and love are ideas that permeate the works, which are figurative though painted without source material. Each work is suggestive of narrative, some inviting interpretation more than others. Slippages in the reading of forms is of keen interest to Johanson, and the artist challenges communication through visual imagery by accepting, inviting, and working with the possibility of multiple readings.

In rendering the forms, Johanson works with a fluidity where legs and arms can dissolve into each other or a figure can be integrated into the ground. Instability keeps the image in flux and the viewers’ imagination engaged and participating in the understanding of the imagery. The integration of abstraction and figuration is key because it demonstrates that both are of the same thought process, which is interconnected with the production of the painting. The changing and moving of the paint is a part of the stirring up of ideas and development of the imagery.

Figuration and representational images have always been a dominant focus in Johanson’s work, though it is rendered without source material, creating a product of the mind rather than an image from the world. Painting can take a familiar form and heighten the viewer’s psychological connection through exaggeration or distortion in scale, colour, proportion and with concentrated and reduced features. Imaginative figuration has the ability to use distilled memory to render forms that not only resemble a likeness, but also carry the potential to express the complexity of associative experience and feelings.

Johanson’s imagery develops in the painting process where earlier stages of the work are loosely improvised, incorporating elements of chance. To start, the artist lays down propositions for compositions in charcoal and paint. Figures suggest themselves or ideas are triggered from these initial marks and emerging images. The process used to develop these works is not towards a direct end, but involves a back and forth between the artist and the materials. This allows for exploration of the rich areas of memory, association and experience, and to have these present themselves in an unpremeditated fashion. This approach creates a strong connection with the viewer because much of the process and decision making is left visible and legible. In this way, Johanson emphasizes the qualities of painting that allow it to be such an effective medium for communication: highlighting the presence of the artist’s hand, and conveying the direct manner in which the materials can respond to the imagination of the artist when not employed in the service of mimicking source material. Johanson’s paintings aim to create rich potential for a psychological engagement with the viewer, where their intellectual involvement and imagination are required.

Collin Johanson received his MFA from Concordia University in 2013 and currently works and teaches in Edmonton, AB. Johanson won the Joseph Plaskett Foundation Award in 2014, and was an RBC Painting Competition finalist in 2008. His work been exhibited in numerous venues including Regart (Quebec), the Museum of Contemporary Canadian Art, the National Gallery of Canada, the Contemporary Art Gallery, Access Gallery, and the Surrey Art Gallery.

Collin Johanson acknowledges the support of the Canada Council for the Arts.