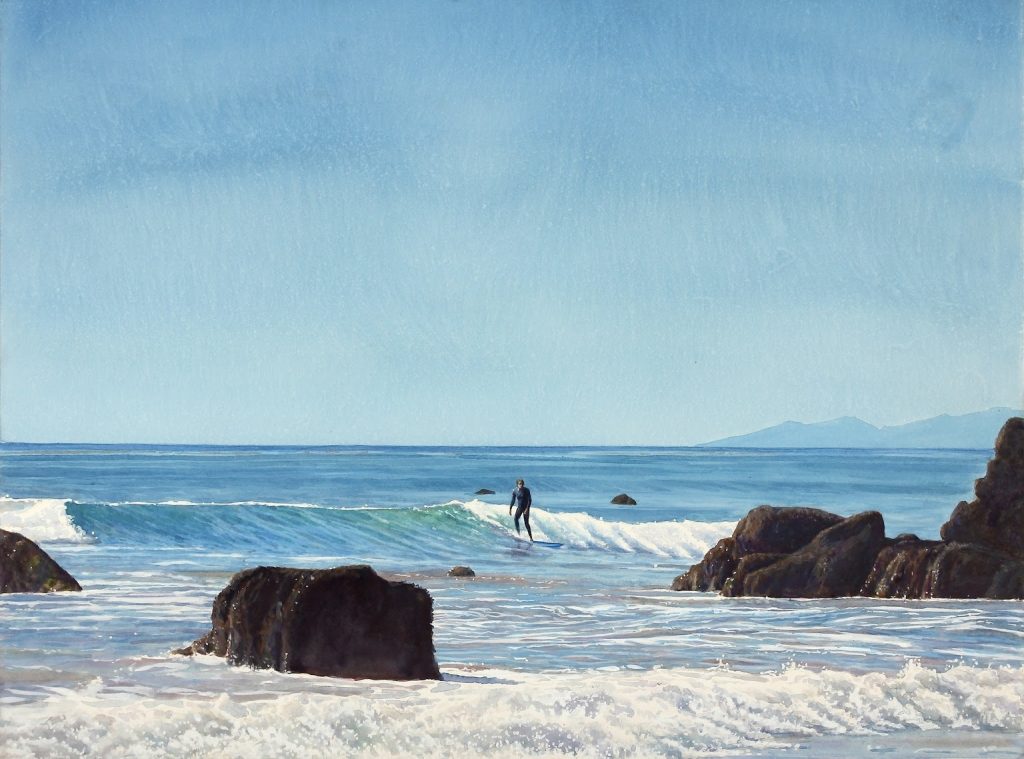 In Tim Gardner’s new exhibition, the artist presents a body of watercolour paintings that combine personal document, landscapes woven with human narrative, and depictions of varying degrees of domesticity.

Tim Gardner’s paintings have often touched on the autobiographical—from portraits of himself and his family to locations where he has lived, and to which he has frequently traveled. His newest series of paintings feels particularly so, as the artist has referred back to his own source material spanning from his residence in LA in the early 2000s to where he lives now on Vancouver Island, and encompassing many transits in between.

In these works, the common thread of the domestic, and different variations of domesticity are present throughout. Crown Royal Kitchen Scene shows a bottle of whiskey prominently placed on a kitchen counter, with a drying rack full of pots and plastic dishes by a sink in the background. In contrast, Breakfast Scene, Lake Louise shows a more grand looking morning spread at a hotel, where white linens and orange juice in stemmed glasses are placed on a table overlooking Lake Louise and a mountain vista, the backdrop framed by layers of open curtains. Together, these paintings show contrasting chapters of the domestic, but are left for interpretation of their exact narratives. Upon closer inspection, nods to some of Gardner’s earlier works are present in both; the bottle of rye in Crown Royal Kitchen Scene seems plucked from his 2015 still-life series of Canadian rye bottles, and the view at Lake Louise has appeared in more than one of his previous landscape paintings.

Along with these two paintings, there are many others in the show which also refer back to earlier bodies of work, bringing a harmony to the collection of images and echoing ideas of the autobiographical: Man in Moonlight, Niagara Falls is a dark, nighttime scene that references his 2015 exhibition Nocturnes at Monte Clark Gallery; Bryan with Cigarette is a candid portrait of a man in a Hawaiian shirt smoking a cigarette against a colourful sunset, reminiscent of Gardner’s early scenes of partying youth; Surfer with Rocky Shore is a lone surfer on a wave, a continuation of the artist’s prolific work on the theme of the isolated figure in a landscape.

Depictions of solitary figures within a natural landscape appear throughout this exhibition and have been an ongoing theme throughout Gardner’s career. The artist is known to subvert expectations of landscape painting in this way, interrupting grandiose scenery with contrastingly mundane human narratives. Man Walking Home shows an etherial looking magic hour snow scene, inhabited by a figure in plain, practical winter wear. Mt Hollywood at Dusk depicts another evening scene, overlooking the twinkling lights of LA from an epic vantage, minorly obstructed by a figure on the wrong side of a fence seemingly interrupting the scene with his un-posed stance.

The subjects woven into Gardner’s work bring a satisfying cohesion to the show, where landscapes are brought into the domestic, still-lives hint at larger vistas, and the diverse scenes all contribute to a common meditation on domestic narratives.

Tim Gardner completed his MFA at Columbia University in 1999 and has since exhibited his work at The National Gallery (London UK), the San Francisco MoMA, Modern Art (London), the Solomon R. Guggenheim Museum, Kunsthalle Basel, the Contemporary Art Gallery (Vancouver), 303 Gallery (New York), and at numerous other institutions. His work is held in collections worldwide including the National Gallery of Canada, the Museum of Modern Art (MoMA), the Solomon R. Guggenheim Museum, the Whitney Museum, and the San Francisco Museum of Modern Art (SFMoMA).